Question Purpose: Where is local parking supply greater than demand, and where is local demand greater than supply, and at what prices for parking does this hold? Does this vary systematically by type of place or other criteria?

This is a fundamental question that addresses the relationship between parking supply, demand, and pricing. This question is to provide guidance for MTC, ABAG, cities, and transit agencies to assess the potential for local parking pricing policies to be applied to the Bay Area. The conditions that led to those policies will be assessed for application to other cities and be used to support the program and assess the potential applicability and/or success for various parking pricing policies. Local jurisdictions are primarily interested in the answers to these questions within their own jurisdictions. These questions are especially dependent on parking economics. Each specific location will have its own balance of supply, demand, and price elasticity that will determine how a set price affects the relationship between supply and demand. Factors affect supply and demand are location-dependent—including demographics, transportation options in the area, local and regional policies, as well as culture. The figure below illustrates the relationships between parking demand, supply and price. 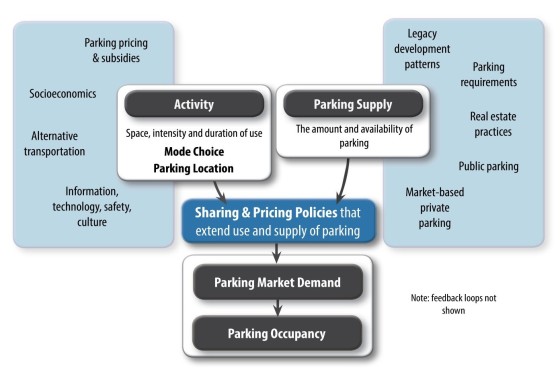 Data analysis methods for this question can be used by local jurisdictions for development of specific strategies. Supply and occupancy data can establish a baseline for comparative analysis, allowing local jurisdictions to evaluate how the relationship between parking supply, demand, and price in their jurisdiction compares to the larger region. Variations in data will be grouped by type of place, demographic, and land use criteria to help organize data so that analysis findings can be compared to areas of similar environments.

Professor Donald Shoup, an expert on parking economics, suggests keeping prices consistent with an occupancy level of approximately 85% in order to realize the “right price” for parking. For areas with more supply than demand, unused parking spaces could be converted to more efficient land uses (such as developments, public space, or parklets); excess (underutilized) parking in these areas could also be used by adjacent high-demand areas through via shared parking policies or valet parking policies (see Policy Question #7-11 for application descriptions). Additional literature relating supply, demand, and pricing includes:

Several studies have studied how parking prices change demand, calculating price elasticity of demand for different regions. The change in demand due to changes in price is also dependent on supply. Because of this, these effects are very location-specific. These studies show a range of price elasticities, from -0.15 to -0.58. These include:

The Bay Area Council Poll in 2014 found that 79% of those polled (in all nine counties) said that the Bay Area faces “crisis in housing costs.”Inclusion of parking increases the cost of building housing, limiting the amount of housing that can be produced under a set budget. Demand for more affordable housing in the Bay Area is sky-high, resulting in long waiting lists. The following studies specifically look at how minimum requirements affect affordable housing:

New York City received an FHWA grant to implement demand-based variable pricing. The conditions that led to the program’s initiation were a high rate of cruising for parking, low availability of parking during peak demand periods, and a high rate of double parking. Within Greenwich Village, pricing was raised from $1 to $2 during the peak demand period from noon to 4pm. Occupancy on weekdays decreased about 8% on weekdays and vehicle turnover increased, allowing a higher number of total vehicles to park. Results of the 6-month pilot were well documented and success of the program resulted in continuing the variable pricing policy, raising the fees to $2/hour off-peak and $3/hour during peak periods.

In 2013, with funding from the Federal Highway Administration (FHWA), the City of Berkeley initiated a pilot program that implemented several on-street dynamic pricing strategies. Hourly rates for on-street parking range from $1.00 to $2.25; prices were set based on the demand for parking in the area. In the Elmwood District, a popular commercial corridor with limited on-street parking, a tiered-parking strategy was implemented to encourage short-term parking and discourage longer-term parking. Prices start at $1.00 and increase $0.50 for every additional hour of stay, up to three hours. Pilots were also initiated in the Downtown Berkeley and Southside/Telegraph neighborhoods. In these areas premium and value areas were established. The higher demand premium areas had shorter time limits and higher hourly rates to encourage turnover, and lower demand value areas had longer time limits and lower hourly rates.

With funding from the FHWA in 2011, San Francisco began an ambitious program to set on-street parking prices at variable levels dependent on the demand for that area. Seven pilot zones were selected to have demand-based pricing, with prices adjusted every few weeks based on occupancy rates. For example, if occupancy rates are below 30%, the price is decreased by 50 cents per hour; if occupancy is above 80%, the price is increased 25 cents per hour (Figure: Weekday Morning Prices at Fisherman’s Wharf).

There are several benefits of the SFpark program. First, vehicles spend less time circling for parking. This reduces traffic congestion and decreases emissions from excess driving. Second, drivers parked in the areas of higher demand will typically park for a shorter time, increasing turnover rate and therefore, making these spaces available to accommodate more people. Last, more people may use alternative modes and carpool to highly demanded destinations with the highest prices, such as baseball games at AT&T Park.

Pierce and Shoup (2013) calculated the price elasticity of demand based on SFPark data of 5,294 changes in price and occupancy within San Francisco. Overall, over the course of the study, meter prices did not increase overall—meters were adjusted both up and down with the average meter price falling 1%. The average elasticity value calculated was -0.4. Therefore, as the cost for parking increased by $1, occupancy fell by 40%. In other words, on a street block-face with 10 spaces, raising the price by 25 cents will open up one parking space.

After the program had been in effect for six months, Pierce and Shoup (2013) looked at two of the seven pilot areas to calculate the price elasticity of demand based on SFPark’s data showing price and occupancy changes in 2012. The study found that the price elasticity of demand in an area at Fisherman’s wharf was -1.3. Here, demand for parking was low (average occupancy at 27%) and prices were decreased to reach higher occupancies. For every $1 decrease in price per hour, occupancy increased 130% (Table: Price and Demand Changes for Two SFPark Study Areas). Even though per hour prices decreased, the parking revenue for the Beach Street area increased, because occupancy increased substantially.

Policy changes require support from City staff, developers, advocates, and/or private citizens in order to initiate change. The conditions that lead to successful parking policies are not wholly based on the physical parking conditions, but largely based on political openness and readiness. In June 2012, MTC held a workshop on parking reform. A survey of local representatives (with a range of stakeholders, local representatives and citizens) after the workshop showed that 65% of respondents are likely to support parking reform in their cities. Over 50% of respondents stated that their Cities are considering and/or pursuing shared parking and employee programs.